How Much Do You Know About Your Daughter’s Boyfriend?

Dating violence is surprisingly common. But for parents, saving an infatuated girl from an abusive guy is a challenging, even dangerous proposition. 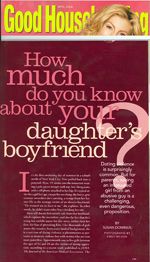 Dating violence used to be overlooked – or else confused with typical adolescent dramatics. Now there seems to be a rising tide of awareness. Last year, a 17-year-old young man in Tuckahoe, New York, strangled and nearly killed his girlfriend, before killing himself. The girl’s mother, Yvette Maldonado, then filed a landmark lawsuit, charging the high school the teens attended with negligence – and accusing the principal of inaction in the face of clear warning signs. But even with more legal and media attention, the challenge for parents and other authorities remains the same – helping the girl to see her situation clearly so she actually wants to leave.

Though Yvette Maldonado and her husband have been advised not to speak to the press, Yvette shared her thoughts through her attorney, David Worby. “She thinks about the number of nights her daughter was behind closed doors on the telephone,” says Worby. “If she had to do it again, she says she’d say, ‘What’s the matter?’ – and not leave the room until she got an answer.”