Bacteria Found in Water Supply By David Worby on July 15, 2005 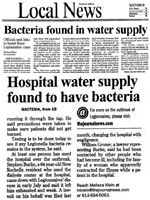 NEW ROCHELLE
Legionnella bacteria have been identified in the water supply inside Sound Shore Medical Center, and health officials are investigating whether that source sickened any of the 21 people who came down with Legionnaires’ disease beginning in June.

The investigation into the outbreak has moved inside the hospital, although laboratory tests have confirmed that bacteria spewing from an air conditioning cooling tower outside the hospital’s Washington Avenue entrance were responsible for two for the 21 cases, Robert Kenny, a spokesman for the state Health Department, said yesterday.

“We have now results that show the presence of Legionella in some water sources inside the hospital, but there are no laboratory findings that link these other sources to any specific patient illness,” Kenny said.

He said testing done several weeks ago showed Legionella was in the potable water supply – water used for drinking and bathing – but declined to be more specific. An analysis of the bacteria was continuing, he said.

Although other cases of Legionnaires’ disease have cropped up in hospitals, including New York-Presbyterian Hospital/Columbia University Medical Center in Manhattan recently, Kenny characterized the Sound Shore outbreak as significant. Normally seven to 10 cases of the illness, which causes pneumonia, are reported in Westchester every year.

The Sound Shore cases started June 21 and county health officials said they all seemed tied to a fine mist of water coming from the air conditioning tower. Those infected, who all had existing health problems, had walked by the tower to enter the hospital or pass by it and may have inhaled the contaminated water, health officials said.

The hospital replaced the tower in July and was taking “appropriate infection control measures,” Kenny said.

John Mamangakis, vice president for operations at Sound Shore, said that at the request of the state Health Department the hospital super-heated its water two weeks ago to kill any bacteria. That involved heating the water to about 160 degrees and running it through the tap. He said precautions were taken to make sure patients did not get burned.

Testing is to be done today to see if any Legionella bacteria remains in the system, he said.

At least one person has sued the hospital over the outbreak. Stephen Burke, a 64-year old New Rochelle resident who used the dialysis center at the hospital, came down with Legionnaires’ disease in early July and said it left him exhausted and weak. A lawsuit on his behalf was filed last month, charging the hospital with negligence.

Our firm was contacted by other people who had become ill, including the family of a woman who apparently contracted the illness while a patient in the hospital.