Three years after the World Trade Center attacks, people who worked and lived near ground zero are sick with respiratory problems 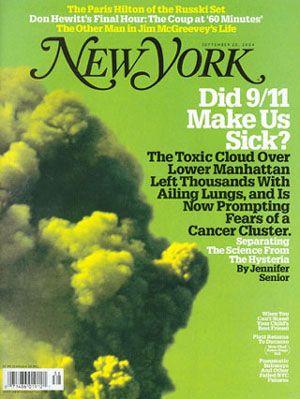 When cops are ailing, they are not, as a rule, especially noisy about it. Two springs ago, John Walcott noticed his energy deserting him.

Then came Mother’s Day. His head swam. He couldn’t catch his breath. As he walked up the stairs to his home, his arms draped to the biceps in shopping bags; he lost his breath again. And then Walcott, all 225 pounds of him, fell to his knees.

Two weeks later, Walcott was in the hematologist’s office with a two-foot needle plunged into his tailbone, trying to keep still as the doctor scraped out samples of his bone marrow. It took just minutes to deliver the diagnosis: acute myelogenous leukemia, a white-blood-cell cancer.

Three years after September 11, it’s clear that the dust and fumes from the World Trade Center wreaked silent havoc on the lungs of thousands of rescue workers. What if it isn’t just their lungs? What if it’s their kidneys, their hearts? What if 9/11 gave them cancer? And what does this mean for the rest of us?

By Monday [September 13, 2004], lawyers for Walcott and a group of at least 600 other workers associated with the World Trade Center cleanup – cops, firefighters, sanitation workers, Transportation Department workers, Con Ed and Verizon employees, and independent day laborers, among others – are expected to file a class-action lawsuit in federal court against World Trade Center developer Larry Silverstein and a number of ground-zero cleanup contractors. The same attorneys are also filing suit against the City of New York, the Port Authority, and the Environmental Protection Agency. The suits allege that dust from the 9/11 attacks made the plaintiffs sick, and seek billions of dollars in funding for medical screening and treatment and billions more in damages. The majority of the plaintiffs are suffering from the respiratory problems we’ve all heard so much about: asthma, sinusitis, and chronic bronchitis. But others have kidney and heart problems. And at least 20 have cancers, says Walcott’s attorney David Worby, including leukemia, Hodgkins’s disease, and esophageal and thyroid cancer. Two have died.

In a study of first responders, doctors at Mount Sinai Hospital’s WTC Worker and Volunteer Medical Screening Program found that nearly three-quarters of the 1,138 subjects they surveyed experienced new or exacerbated respiratory problems.

Anyone who lived or worked near Ground Zero remembers the rancidness of the fumes. Some 40,000 men and women spent months on that pile, clearing it away

In the aftermath of the attacks, the EPA issued multiple reassurances about the air quality around Ground Zero. But a scathing report, released last summer by the EPA’s Inspector General, declared that it was impossible to say how safe the outdoor air was at that time. It turns out that on September 18, the day that EPA head Christie Todd Whitman issued a press release saying she was pleased to note that the air was safe to breathe, the EPA still hadn’t completed testing for mercury, cadmium, lead, dioxin, PAHs, or PCBs. The Inspector General’s report later revealed that the EPA was required to send all of its press statements to the White House Council on Environmental Quality, which ran them through a heavy clean-and-rinse cycle before releasing them to the public, transforming modest yet cautionary public advisories into cheerful proclamations that the air was clean.

David Worby, Walcott’s attorney and veteran trial lawyer, made his fortune from personal-injury cases, including seven-figure settlements on behalf of children hit by drunk drivers and victims of unjustified police shootings. Today, he was in the midst of slowing down his legal career when he heard about Walcott through a friend.

"If you expose people to this amount of lead, cadmium benzene, asbestos, and glass shards, they are going to be sick," says Worby. "They’re going to be sick in a way that this country has never seen except maybe for Agent Orange." And it’s not just the sheer volume of toxins in the air, he adds. It’s what he calls the "cocktail pulverization effect." No one, he points out, has ever studied what this particular mix of chemicals might do to people. "How can they say it’s not harmful?" he asks. "That’s just arrogant."

"I am prognosticating," he says, "that these men who came home and passed out in their beds, with the fibers and glass shards all over them, and these women who came home every night and washed their clothes, with their children’s clothes" he trails off, "More people could die from this than died on the day of 9/11."

If it were only plaintiff’s lawyers who were making these allegations, their claims might not seem so credible. But there are doctors who are at least willing to countenance the notion that 9/11 was different. Charles Hesdorffer, the director of the bone-marrow transplant and tumor immunotherapy program at Columbia Presbyterian, provided testimony to the federal government’s Victim Compensation Fund. He consented because he found it odd that two of his own patients at Columbia Presbyterian were diagnosed with pancreatic cancer after working at the World Trade Center pile, and one of those patients knew of two others. Four cases in 40,000 – that was a much higher incidence than in the population at large... "I thought it was strange," says Hesdorffer. "And while it was a short time for these patients to present, it wasn’t that short. Though we think cancer’s a slowly developing process, no one knows for sure."

It’s also possible, doctors say, that the carcinogens in the World Trade Center dust accelerated cancers that were already under way in some rescue workers, either by promoting further mutations in genes whose cancerous transformations were nearly complete, or by tampering with genes that suppress these deadly mutations.

In the face of this uncertainty, Worby, Nadler, and other advocates believe the best recourse is to set up and fund monitoring and treatment programs. Yet this doesn’t seem to be a priority for the city, the state, or the federal government The only city-run attempt at monitoring the health effects of 9/11 is something called the World Trade Center Registry, and that’s not even a medical program but a list of people who submit themselves to a half-hour interview, describing the ways they’re unwell. The Mount Sinai monitoring program sees only first responders, allows only three visits a patient, and has only five years of funding. Its $1.5 million treatment program, a smaller effort involving just 880 patients, is funded entirely by philanthropy

In March, Congresswoman Carolyn Maloney introduced the Remember 9/11 Health Act, a bill that demands a coordinated federal response to the terror attacks – not just in the form of monitoring potential victims, but in treating them, and for a period of twenty years.

What about someone like John Walcott? Perhaps the least we owe him is to give him the benefit of the doubt.

That’s how Gregory Fried, the former NYPD chief surgeon, sees it. It’s not that he’s convinced cancer clusters are destined to develop around Ground Zero. Rather, it’s that he can’t say the opposite, and he knows enough about the history of medicine to recognize that one century’s orthodoxy is the next century’s folly.

Too often, says Fried, the onus has been on the cops to prove that 9/11 made them sick. "But what does proof, here, mean?" he asks. "With John Walcott, you got a cause, you got an effect, and if you’re not going to link them, shame on you. The tie goes to the runner."