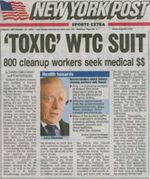 Richard Mulhern remembers working at Ground Zero in the days and months after 9/11 and thinking that he was standing in a “toxic cloud.”

“The air, it didn’t look good. But our country was calling for our help,” said Mulhern, a telecommunications worker who spent 18 months working on the cleanup and reconstruction around the World Trade Center. Mulhern, who says he suffers from chronic respiratory problems that prevent him from climbing stairs or playing with his kids, is among 800 people who filed a class-action lawsuit in federal court in Manhattan claiming they were not adequately protected during the cleanup.

Lawyers for the workers want medical expenses covered for all the affected workers – possibly as many as 400,000 as illnesses develop in the future – as well as the creation of a $1 billion, decades long medical-testing program to track sicknesses caused by exposure to toxins present at Ground Zero in the aftermath of the terror attacks.

The lawsuit names the leaseholder of the World Trade Center, Silverstein Properties, and four construction companies hired to oversee the removal of 1.6 million tons of smoldering debris who “should have known that safety precautions were needed to protect the rescue workers and cleanup workers.”

“The tragic reality is that so many of the brave heroes who worked so tirelessly and unselfishly are becoming a second wave of casualties of this horrific attack, and we’re only seeing the tip of the iceberg,” said David Worby, a lawyer representing the plaintiffs.

The lawsuit alleges that Silverstein Properties and the cleanup supervisors were negligent and violated labor laws because they were aware of the dangers, including asbestos, and made little effort to protect workers. The city, Port Authority and the Environmental Protection Agency may be added to the list of defendants.

Howard Rubenstein, a spokesman for Silverstein, said the cleanup was conducted by the city and the Federal Emergency Management Agency. “We had no control over that operation and no ability to supervise what safety precautions were taken,” he said.

The suit was filed Friday, the last day before a federal three-year statute of limitations expired for lawsuits related to the terror attacks, and made public yesterday.

Notices of claim have also been filed against the city, the Port Authority, and three federal agencies for their roles in managing the cleanup, Worby said.