Hundreds Sue for Billions Over Ground Zero Cleanup By David Worby on September 14, 2004 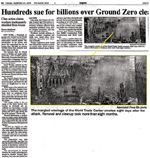 NEW YORK – Hundreds of people who worked on the World Trade Center cleanup have filed a class-action lawsuit against the leaseholder of the towers and those who supervised the job, alleging they did little to protect workers from dust, asbestos and other toxins in the air.

The lawsuit, filed in federal court on Friday and made public yesterday, was brought against Silverstein Properties and the four construction companies hired to oversee the removal of the 1.5 million tons of debris.

David Worby, a lawyer for the plaintiffs, said he will seek billions of dollars in compensation for victims. The lawsuit also asks for the establishment of a system to track for the next 20 years all those who were exposed.

The lawsuit alleges that many workers did not have access to protective gear, and those who did were not taught how to wear it properly.

While some of the plaintiffs suffer from afflictions ranging from tumors to heartburn, many say they show no symptoms from their work at the site, but they have joined the suit because they fear they risk developing cancer in the future.

“The tragic reality is that so many of the brave heroes who worked so tirelessly and unselfishly are becoming a second wave of casualties of this horrific attack, and we’re only seeing the tip of the iceberg,” Worby said.

Howard Rubenstein, a spokesman for trade center leaseholder Larry Silverstein, said the cleanup was conducted by the city and the Federal Emergency Management Agency.

“We had no control over that operation and no ability to supervise what safety precautions were taken,” he said. The other defendants said they had not seen the complaint and had no immediate comment.

The class-action case, with about 800 plaintiffs, was filed the last day before a federal three-year statute of limitations expired for lawsuits related to the terrorist attack.

The government is already funding six health screening programs to monitor Ground Zero workers, but none are funded beyond 2009.

Last week, the Centers for Disease Control and Prevention released a study showing that many recovery workers suffered from respiratory problems long after the cleanup concluded, and that some still battle ailments.

Proper respiratory gear would have allowed the workers to block out smoke, dust, diesel exhaust, pulverized cement, glass fibers, asbestos and other chemicals and prevent throat and lung diseases, according to the CDC study.

It found that only about one in five of the workers wore respirators while they worked at the site.

According to AMEC’s Web site, the company stationed safety experts on site during the cleanup and provided respirators, hard hats and safety goggles to workers.