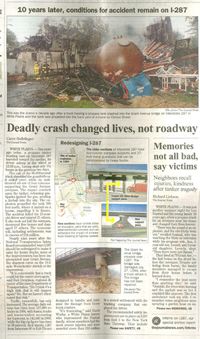 WHITE PLAINS—Ten years ago today, a propane tanker heading east on Interstate 287 barreled toward the median, its driver asleep at the wheel at 12:30 a.m., having slept only 5½ hours in the previous two days.

The cab of the 80,000-pound truck shredded the guardrails as it rolled over, while its tank sheared off one of four columns supporting the Grant Avenue overpass. The impact cracked open the tanker, releasing gas. Sparks ignited the gas, sending a fireball into the sky. The explosion propelled the tank 300 feet north, where it landed on a house, engulfing it in flames. The accident killed the 23-year-old driver and injured 23 others. It also took out half the overpass, destroyed five homes and damaged 17 others. The economic toll, including settlements, was in excess of $14 million.

Nearly nine years after the national Transportation Safety Board recommended ways I-287 should be redesigned to make it safer for heavy trucks, none of the improvements has been implemented near Grant Avenue, the sharpest curve on the 10.2-mile Westchester stretch of the expressway.

“It is conceivable that a truck could hit the center piers again,” said Bob Dennison, regional director of the state Department of Transportation. “Do I think it’s a high risk that it will happen again? No. But we haven’t eliminated that risk.”

Traffic, meanwhile, has only increased. The average daily volume has risen from 127,000 vehicles in 1994, with buses, trucks and tractor-trailers accounting for 6 percent, to 142,943 in 2003, while the big-rig figure has risen to 10 percent. As it stands, I-287 from Interstate 95 to Exit 5 is not designed to handle and minimize the damage from heavy truck crashes.

“It’s frustrating,” said David Worby, a White Plains lawyer who represented the Espinal family, whose members had the most severe injuries and were awarded more than $10 million in a sealed settlement with the trucking company that employed the driver.

The recommended safety improvements are in place on I-287 from Exit 5 to the New York State Thruway. They include rumble strips on the shoulders to awaken drowsy drivers and 42-inch-high concrete medians that grow to 96 inches at the foot of overpass support piers and are designed to deflect tractor-trailers.

A new federal rule, in effect since Jan. 4, obliges truckers to drive no more than 11 hours after taking 10 consecutive hours off and prohibits driving after they’ve been on duty for 14 hours. The old rule allowed them to drive for 10 hours within 15 on-duty hours, after taking eight hours off. But the new rule was overturned on July 16 by a federal appeals court in Washington. It will remain in effect through Sept. 6, while the Federal Motor Carrier Safety Administration decides whether to appeal the decision.