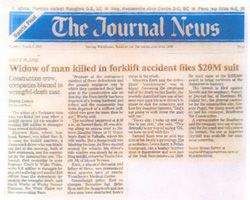 The widow of a Yorktown man who was killed last year when a forklift pierced his car window is seeking $20 million in damages from several defendants.

Maureen Korn, whose husband, Samuel was killed Nov. 9, is suing the forklift operator, a dump truck driver who was blocking part of the roadway, both of their employers, and the contractor for the construction site. The lawsuit, filed yesterday in state Supreme Court in White Plains, seeks $10 million in damages for pain and suffering and another $10 million from the defendants for causing the wrongful death, said David Worby of Worby Vecchio Edelman, the White Plains law firm representing Korn.

“Because of the outrageous conduct of these defendants and the grossly negligent way in which they conducted their business at the construction site on that day, the Korn family has been deprived of a loving husband and father, and the community has been deprived of a selfless individual who gave far more than he got.” Worby said.

The accident happened at 8:10 a.m., as Samuel Korn , 49, was driving along an access road to Hebrew Hospital Home at 51 Grasslands Road in Valhalla, where his wife works. But a dump truck was blocking his lane. As Korn steered around the vehicle, his driver’s side window was struck by an exiting forklift, driven by Travis Merritt, 38, of Mount Vernon.

Korn, a physical therapist and father of three, was pronounced dead minutes later at nearby Westchester Medical Center.

Maureen Korn said the defendants’ “carelessness” was to blame. Assessing the emotional toll of the death on her family, she tearfully described how one of her sons now uses his new driver’s license to visit the cemetery, and how her daughter laments, “Dad’s not going to walk down the aisle with me.”

Samuel Korn was an avid student of his family’s genealogy. His grandfather, Lewis Korn, a Polish immigrant, ran a kosher butcher shop in Haverstraw and won part of the Irish Sweepstakes in 1938. He used some of the $150,000 award to bring survivors of the Holocaust to America.

A representative for Bradhurst said the company was not responsible for the crash and will contest the lawsuit. No one at superior Drywall was available for comment yesterday.