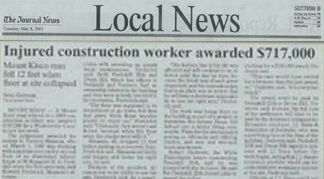 MOUNT KISCO – A Mount Kisco man injured in a 1999 construction accident was awarded $717,000 by a Westchester County jury last week.

The judgment awarded the money to Ventura Almanza, who on March 1, 1999 was working with a jackhammer on the second floor of an abandoned schoolhouse at 90 Ringgold St. in Peekskill when the floor gave way, said Howard Frederick, Almanza’s attorney.

“The floor was supposed to be demolished or go down, but they had given them these wooden planks to stand on,” Frederick said. “Obviously, they weren’t sufficient, because when the floor went, the planks went with it.”

Almanza, 42, dropped 12 feet before landing on a concrete floor, Frederick said. Almanza cut his lip and tongue and broke his right arm, he said.

Because of the accident, Almanza lost some ability to use his arm, Frederick said. As a result, he’s had to take a lower-paying job as a part-time worker in a restaurant kitchen, Frederick said.

“The bottom line is his life was affected and will continue to be affected until the day he dies, because the break was of such great magnitude and the reconstruction that took place was so severe that he will have a decrease in his ability to use his right arm,” Frederick said.

The work was being done on the building as part of a project to transform the former Drum Hill School into a senior living community. Plans for the site included putting in 120 units and offering studios, and one- and two-bedroom apartments.

Robert Ondrovic, the White Plains-based lawyer representing Peekskill IDA, said he was pleased with the decision. He said the Peekskill IDA doesn’t plan to appeal to ruling.

Before the trial started, Almanza’s lawyers were asking for $1.5 million, while defendants were pushing for a $500,000 award, Ondrovic said.

“This case would have settled for a lot more than the jury awarded,” Ondrovic said. “It’s a very fair result.”