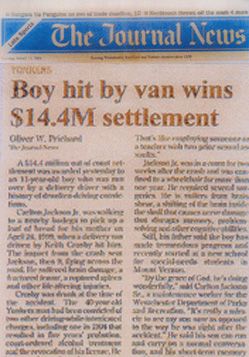 Carlton Jackson Jr. was walking to a nearby bodega to pick up a loaf of bread for his mother on April 24, 1999, when a delivery van driven by Keith Crosby hit him. The impact from the crash sent Jackson, then 9, flying across the road. He suffered brain damage, a fractured femur, a ruptured spleen and other life-altering injuries.

Crosby was drunk at the time of the accident. The 40-year-old Yonkers man had been convicted of two other driving-while-intoxicated charges, including one in 1994 that resulted in five years’ probation, court-ordered alcohol treatment and the revocation of his license. He is currently serving a four-year sentence in state prison for the accident that injured Jackson.

The settlement will be paid on behalf of Crosby, his employer, Stanlou Tobacco of Yonkers and two other companies contracted to provide drivers for Stanlou.

“How do you employ someone as a driver with two DWI’s? It defies imagination,” said the boy’s attorney, David Worby. “Of course, the employer claims they did not know, but how do you not know? That’s like employing someone as a teacher with two prior sexual assaults.”

Jackson Jr. was in a coma for two weeks after the crash and was confined to a wheelchair for more than one year. He required several surgeries. He suffers from brain shear, a shifting of the brain inside the skull that causes nerve damage that disrupts memory, problem-solving and other cognitive abilities.

Still, his father said the boy has made tremendous progress and recently started at a new school for special-needs students in Mount Vernon.

“By the grace of God, he’s doing wonderfully,” said Carlton Jackson Sr., a maintenance worker for the Westchester Department of Parks and Recreation. “It’s really a miracle to see my son now as opposed to the way he was right after the accident.” He said his son can run and carry on a normal conversation, and his short-term memory problems are likely to improve.

Bonnie Paston of the long Island chapter of Mothers against Drunk Driving said the lawsuit should serve as a warning to other companies that may not perform background checks for their drivers. “It’s the company’s responsibility to run a check,” Paston said. “I’m an ex-teacher, and I was fingerprinted before I was allowed to go into a classroom to work with children. That’s the least a company should do.”