City admits no liability despite $500,000 verdict 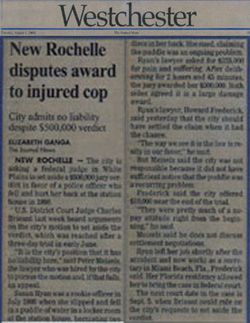 NEW ROCHELLE – The city is asking a federal judge in White Plains to set aside a $5000,000 jury verdict in favor of a police officer who fell and hurt her back at the station house in 1998.

U.S. District Court Judge Charles Brieant last week heard arguments on the city’s motion to set aside the verdict, which was reached after a three-day trial in early June.

“It is the city’s position that it has no liability here,” said Peter Meisels, the lawyer who was hired by the city to pursue the motion, and if that fails, an appeal.

Susan Ryan was a rookie officer in July 1998 when she slipped and fell in a puddle of water in a locker room at the station house, herniating two discs in her back. She sued, claiming the puddle was an ongoing problem.

Ryan’s lawyer asked for $325,000 for pain and suffering. After deliberating for 2 hours and 45 minutes, the jury awarded her $500,000. Both sides agreed it is a large damage award.

Ryan’s lawyer, Howard Frederick, said yesterday that the city should have settled the claim when it had the chance.

“The way we see it is the law is really in our favor,” he said.

But Meisels said the city was not responsible because it did not have sufficient notice that the puddle was a recurring problem.

Frederick said the city offered $10,000 near the end of the trial.

“They were pretty much of a no-pay attitude right from the beginning,” he said.

Meisels said he does not discuss settlement negotiations.

Ryan left her job shortly after the accident and now works as a secretary in Miami Beach, Fla., Fredereick said. Her Florida residency allowed her to bring the case in federal court.

The next court date in the case is Sept. 5, when Brieant could rule on the city’s requests to set aside the verdict.