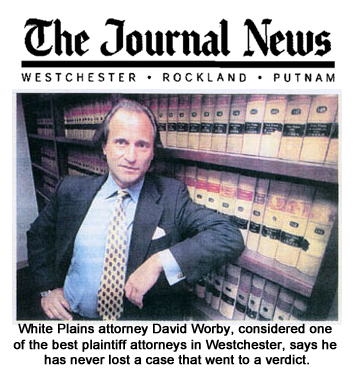 All the world’s a stage. Especially for attorneys.

Consider Henry Miller and David Worby, two of the area’s most prominent plaintiff’s attorneys who have won some of the biggest personal-injury lawsuits in the history of Westchester and Putnam counties.

Using courtroom theatrics often is how attorneys get those big settlements.

“I play to my strengths,” says Miller, who once studied acting under legendary coach Stella Adler. “I’m always comfortable before an audience and with words. I’m as relaxed in the courtroom as out, which is a tremendous advantage.”

In courtrooms across the northern suburbs, attorneys practice their trade with varying levels of melodrama.

State Supreme Court Justice Joan Lefkowitz sums up the personal qualities that she and her peers think make an outstanding civil attorney. “A personality, meaning the ability to come off as a human being with a sense of humor, and the ability to communicate with people.”

Gannett Suburban Newspapers talked with area attorneys and judges and reviewed civil lawsuits filed in Westchester and Putnam in the past 15 years to find out who were the most successful attorneys in personal injury, matrimonial, medical malpractice, product liability or any other type of civil case.

While Miller and Worby are near the top of everyone’s list of best plaintiff’s attorneys there are stars in every specialized field.

The same case that would produce a jury verdict for the plaintiff worth $2 million in the Bronx would yield $1 million in Westchester and only $100,000 in Putnam, says attorney David Worby.

He is not exaggerating.

According to figures compiled by the Jury Verdict Reporter for Gannett Suburban Newspapers, from 1981 to this year, the average Bronx verdict was $1.4 million, compared with $481,359 in Westchester and $57,769 in Putnam.

“You get IBM executives, white-collar types, small-business men and homeowners who can’t be tricked or bamboozled and who feel the burden of proof is on the plaintiff,” Worby says. “There’s no need for tort reform here.”