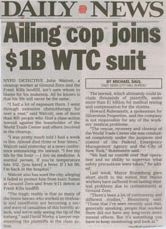 NYPD Detective John Walcott, a cleanup worker at Ground Zero and the Fresh Kills landfill, isn’t sure whom to blame for his leukemia. All he knows is that his life will never be the same.

“I had a lot of exposure there. I went through extensive chemotherapy for over a year,” said Walcott, one of more than 800 people who filed a class-action lawsuit against the leaseholder of the World Trade Center and others involved in the cleanup.

“I was pretty much told I had a week to live. Almost died three or four times,” Walcott said yesterday at a news conference announcing the lawsuit. “I live my life by the hour – I live on medicine. A normal person, if you’re temperature hits 102, [you have] a fever. If I hit 99, I’m back in the hospital.”

Walcott also has sued the city, alleging it failed to protect him from toxic fumes at Ground Zero and from 9/11 debris at Fresh Kills landfill.

“The tragic reality is that so many of the brave heroes who worked so tirelessly and unselfishly are becoming a second wave of casualties of this horrific attack, and we’re only seeing the tip of the iceberg,” said David Worby, a lawyer representing the plaintiffs in the class action.

The lawsuit, which ultimately could include thousands of plaintiffs, seeks more than $1 billion for medical testing and compensation for the victims.

Howard Rubenstein, a spokesman for Silverstein Properties, said the company is not responsible for any of the workers’ medical problems.

“The rescue, recovery and cleanup of the World Trade Center site was conducted completely under the auspices and control of the Federal Emergency Management Agency and the City of New York,” Rubenstein said.

“We had no control over that operation and no ability to supervise what safety precautions were taken,” he added.

Last week, Mayor Bloomberg gave short shrift to the notion that rescue workers have suffered from lasting medical problems due to contaminants at Ground Zero.

“There’s been a lot of controversy and different studies,” Bloomberg said. “Those that I’ve seen recently said that, generally speaking, people that worked there did not have any long-term detrimental effects. But it’s something you have to keep monitoring and look at.”