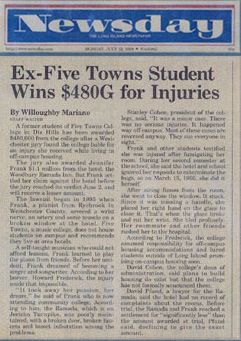 A former student of Five Towns College in Dix Hills has been awarded $480,000 from the college after a Westchester jury found the college liable for an injury she received while living in off-campus housing.

The jury also awarded Jennifer Frank $1.1 million from the hotel, the Woodbury Ramada Inn. But Frank settled her claim against the hotel before the jury reached its verdict June 2, and will receive a lesser amount.

The lawsuit began in 1995 when Frank, a pianist from Ryebrook in Westchester County, severed a wrist nerve, an artery, and some muscle on a broken window at the hotel. Five Towns, a music college, does not house students on campus and recommends they live at area hotels.

A self-taught musician who could not afford lessons, Frank learned to play the piano from friends.Before her accident, Frank dreamed of becoming a singer and songwriter. According to her lawyer, Howard Frederick, the injury made that impossible.

“It took away her passion, her dream,” he said of Frank who is now attending community college. According to him, the Ramada, which is on Jericho Turnpike, was poorly maintained, with a broken door, broken faucets, and insect infestation among the problems.

Stanley Cohen, president of the college, said, “It was a minor case. There was no serious injuries. It happened way off campus. Most of these cases are reversed anyway. They sue everyone in sight.”

Frank and other students testified she was injured after fumigating her room. During her second semester at the school, she said the hotel and school ignored her requests to exterminate the bugs, so on March 15, 1995, she did it herself.

After airing fumes from the room, she went to close the window. It stuck. Since it was missing a handle, she placed her right hand on the glass to close it. That’s when the glass broke and cut her wrist. She bled profusely. Her roommate and other friends rushed her to the hospital.

According to Frederick, the college assumed responsibility for off-campus housing accommodations and lured students outside of Long Island promising on-campus housing soon.

David Cohen, the college’s dean of administration, said plans to build housing do exist but that the college has not formally announced them.

David Pfund, a lawyer for the Ramada, said the hotel had no record of complaints about the rooms. Before trial, the Ramada and Frank reached a settlement for “significantly less” than the amount awarded at trial, Pfund said, declining to give the exact amount. 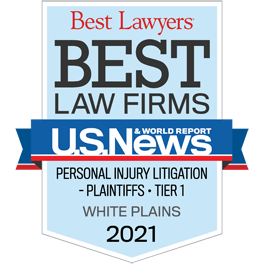