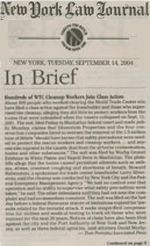 About 800 people who worked clearing the World Trade Center site have filed a class action against the leaseholder and those who supervised the cleanup, alleging they did little to protect workers from the toxins that were unleashed when the towers collapsed on Sept. 11, 2001. The suit, filed Friday in Manhattan federal court and made public Monday, claims that Silverstein Properties and the four construction companies hired to oversee the removal of the 1.5 million tons of debris “should have known that safety precautions were needed to protect the rescue workers and cleanup workers…and anyone else exposed to the caustic dust from the airborne contamination, toxins and other substances.” The suit was filed by Worby Vecchio Edelman, LLP in White Plains and Napoli Bern in Manhattan. The plaintiffs allege that the toxins caused persistent ailments such as asthma, stress, constant coughing and shortness of breath. Howard Rubenstein, a spokesman for trade center leaseholder Larry Silverstein, said the cleanup was conducted by New York City and the Federal Emergency Management Agency. “We had no control over that operation and no ability to supervise what safety precautions were taken,” he said. The other defendants said they had not seen the complaint and had no immediate comment. The suit was filed on the last day before a federal three-year statue of limitations expired for lawsuits related to the terrorist attack. It seeks unspecified compensation for victims and medical testing to track all those who were exposed for the next 20 years. Notices of claim have also been filed against the city and the Port Authority of New York and New Jersey, as well as three federal agencies, said attorney David Worby.

An angry mother yesterday accused Westchester Medical Center of botching a routine procedure on her daughter that left the young woman comatose and brain-damaged.