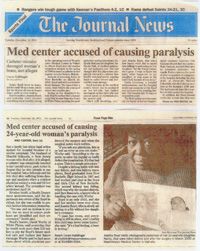 Nancy Boyd loved to dance, and her smile lit up a room, but today the 24-year-old can no longer dance, smile or even swallow.

Boyd’s mother, Juanita Boyd, said yesterday that’s because something went horribly wrong in the operating room at Westchester Medical Center in Valhalla, where Boyd went for routine outpatient surgery in the spring of 2000 to insert a catheter in her jugular vein for kidney dialysis.

Instead of returning home to New Rochelle on March 28, 2000, Boyd suffered irreversible brain damage. She lapsed into a coma, from which she emerged about two months ago.

Acting on her daughter’s behalf, Boyd’s mother filed a lawsuit yesterday in state Supreme Court in White Plains, accusing the medical center and her physicians, Dr. Khalid Butt and his daughter, Dr. Fauzia Butt, of medical malpractice and negligent care. The suit charges that the physicians mistakenly inserted a catheter into Boyd’s vertebral artery, causing Boyd to suffer severe and irreversible brain damage.

Boyd remains at the medical center, where she is paralyzed on her left side, has limited movement on her right side and cannot speak or communicate, her mother said.

“She’s still breathing, yes,” said Juanita Boyd, who takes four buses every day to spend time talking to and caring for her daughter, “but the Nancy I know, she’s gone. I want to know the truth, what happened to my daughter, to stop some of the hurt I feel, because it’s so deep.”

Carin Grossman, a hospital spokeswoman, said the hospital would not comment on the Boyd case because of the pending lawsuit. The hospital has 30 days to respond in court.

The Boyd case came the same day the family of former congressional candidate Lawrence Otis Graham alleged that his mother Betty Graham was left blind after an outpatient procedure last month. It also comes on the heels of other accusations of negligence at the hospital, including the July death of 6-year-old Michael Colombini, who died after an accident at the hospital’s MRI unit. The boy’s parents have filed a notice of claim against the hospital.

In addition, the Boyed lawsuit marks the second time this year that a family has taken legal action against the hospital because of a similar complaint. The husband of Shanthi Srikonda, a New Jersey woman who died after, it is alleged, a catheter was mistakenly inserted in her carotid artery, gave notice in August that he also intends to sue the hospital. Satya Srikonda said his wife died after suffering brain damage and paralysis when a resident physician missed a vein and hit her artery instead. The procedure was performed April 19.

Kristine Smith, a Health Department spokeswoman, said the department was aware of the Boyd incident, but she was unable to provide further information yesterday.

“No one and no system is perfect, but we need to ensure problems are identified and they are corrected,” Smith said.

Boyd’s lawyer, David Worby of White Plains, said yesterday that he would seek more than $10 million to pay for Boyd’s future medical care and replace lost future earnings. Worby said he had questions about which physician performed the surgery and when the surgical notes were written.

“If you ask any physician, this is as bad an error as you can make,” Worby said. “According to the experts, to miss the jugular so badly defies the imagination. It’s that bad a miss. This is a simple procedure.”

Despite a lifelong battle with kidney failure, and two kidney transplants, Boyd graduated from New Rochelle High School in 1997 and had worked part time at the Boys and Girls Club of New Rochelle. Her second kidney was failing, which was why she needed dialysis, said Sam Rosmarin, a lawyer who is handling the case with Worby.

Boyd is an only child, and she and her mother were very close, said Juanita Boyd, who is slowly adjusting to a life without her daughter’s company.

“I pass her room, and everything is still in place, and I realize this child may never come home,” she said. “It’s a bad feeling, a lonely feeling.”