Five times a day, someone is killed by a truck driver who’s asleep at the wheel. 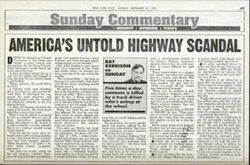 During the Republican National Convention in San Diego last month, a young woman was driving down the San Diego freeway when mechanical trouble forced her to the side of the road.

A man traveling behind her in a van saw her plight and stopped to help. He gave her his cellular phone to call for help.

Within moments, the world fell in on them.

A monster truck came barreling down the Freeway and swerved toward them. It sideswiped the van, grazed the good samaritan, and slammed head-on into the woman’s car, killing her instantly as she was dialing for help.

A police investigation disclosed the cause of the tragedy. The truck driver had fallen asleep at the wheel.

When I read the details, I assumed it was an isolated disaster, one of those horrendous, unpredictable things that happen in life. In fact, it is such a common, everyday calamity that it is a national scandal crying out for remedy.

“But that’s just deaths, which are the only statistics available. There are a lot of quadriplegics, paraplegics, people with multiple fractures, spinal fractures, and brain-damaged people whose injuries are not recorded.”

Still, 2,000 fatalities a year means that what happened in San Diego last month occurs, on average, five times every day of the year across the country.

This is catastrophic – more so because it is preventable. And that’s why Worby insists something should be done about it.

The attorney had a brutal introduction to the heartache a sleeping truck driver can inflict. “About seven years ago,” he says, “a Bronx superintendent was standing by the side of his car in Georgia when he was hit by a truck driver who fell asleep. The man was literally decapitated.”

Worby was hired for the lawsuit that followed. He won the case but that’s when he began digging into the magnitude of the problem. How many truck accidents were related to driver drowsiness? The statistics were very elusive.

Two years ago, Worby was swept up in a local truck disaster of terrifying proportions. At about 2:30 a.m. on July 27, 1994, a tanker-trailer, loaded with propane gas, was roaring through White Plains on Route I-287 when it slammed into an overpass.

The tank portion, exploding into an inferno, flew through the air like a rocket into a residential neighborhood, landing on a house occupied by a young Dominican worker, his pregnant wife, two small children and his mother-in-law.

The destruction, the terror and the burns and injuries suffered by the family were indescribable. They have since undergone so many surgeries that Worby has lost count.

“When the National Highway Traffic Safety Administration findings were released, they confirmed what we had suspected – the driver had fallen asleep,” he says.

The truck driver, killed in the accident, had been at the wheel for 15 straight hours. His employer was indicted for falsifying the driver’s records, a not-uncommon practice in the industry. Highway regulations stipulate drivers may not work more than 10 hours, followed by eight hours off.

“Every tractor-trailer is a dangerous vehicle, but when it’s carrying fuel, it’s a bomb,” says Worby. “The White Plains accident was a one-vehicle accident. No cars were involved, yet nearly all the victims were burned half to death.”

Worby says the problem is that some trucking companies allow – even encourage – drivers to exceed the regulated hours at the wheel and cover it up by falsifying the logs. When accidents happen, they are not held to strict account.

Worby makes much of his living in litigation but he’s seen enough of the mayhem to seek an end to it. “When you see a whole family maimed, you know something has to be done.”

He suggests three courses of action:

• Change the law to apply economic pressure on trucking companies to abide by the regulations. “Treble damages in civil suits,” Worby suggests.

• Invoke something like the three-strike rule. “Repeat offenders, instead of paying repeat fines should have their licenses revoked,” says Worby.

• Let police spot-check drivers to make sure they are not violating regulations. “Just as DWI spot checks are deterrents on car drivers, this would be a deterrent for truck drivers,” says Worby.

The attorney is not advocating a mass blitz on truck companies and drivers, most of whom operate within the law. “Anyone can fall asleep,” he said. “Sanctions should be applied only on those who deliberately break the rules.

“Tough rules won’t prevent a driver from falling asleep but they will prevent companies and drivers from falsifying logs to conceal working over the hourly limits. They will also make the companies more aggressive in monitoring their drivers.”

Five deaths a day is a high price to pay for preventable negligence, but the casualty toll is undoubtedly far higher. “We can’t get the total number of accidents due to sleeping drivers but I’m sure the Traffic Safety Board has access to it.” Worby says.

Aside from his courtroom experience, David Worby has considerable experience in the field. He paid his way through college by driving air freight trucks out of Newark Airport.

But he has reached the point where he has seen enough tragedies to last a lifetime. It’s time, he believes, to do something about it.